Hi guys, Matt has put out a couple of videos updating on the ACR colouring book we launched earlier this month. Below is the first of these showing how Matt coloured in his Steyr ACR.

In the second video Matt tackles the Heckler & Koch G11 and gives an update on the colouring book and the channel:

Thanks for watching chaps & thanks so much for your support in 2019, we greatly appreciate it. It’s been a busy year and we hope that you’ve all enjoyed our videos!

You can still pick up a copy of the ACR colouring book and the G11 sticker at www.armourersbench.com/shop.  we’re very much looking forward to seeing your artistic sides when you send us some photos of your colouring to – contact@armourersbench.com.

We’ll be back soon with more videos!

The Armourer’s Bench are proud to introduce our very first ‘informative colouring (coloring) book’. Not only can you colour in the prototypes from the US Army’s Advanced Combat Rifle trials but you can also learn about the guns, how they worked, performed and the outcome of the trial as you colour! 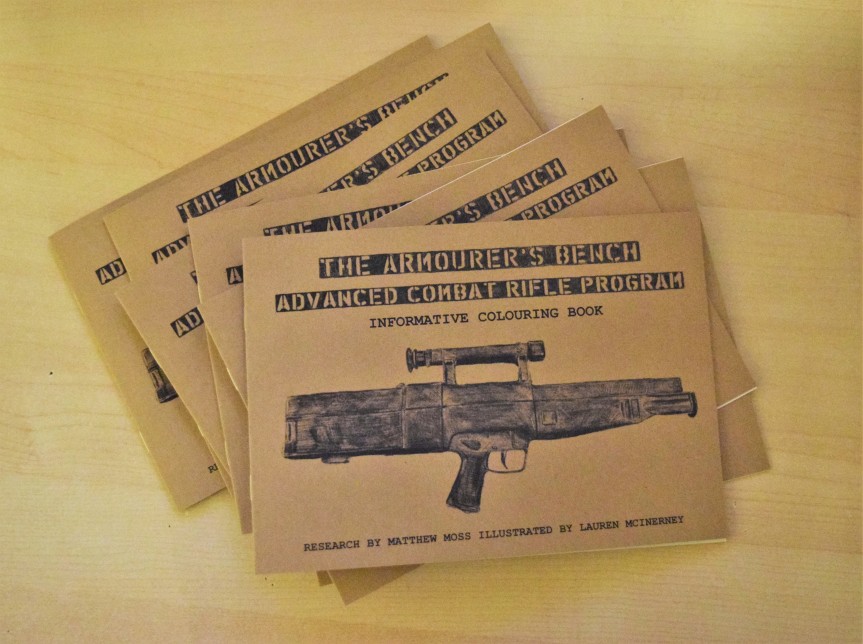 Why a colouring book? Well, simply put, no one else has done one before! With the help of our brilliant illustrator, Lauren McInnerney, we put the book together to give you guys something a bit different, something fun!

We have a limited run of these little books and we will do our very best to get them our ASAP if you order them for Christmas. 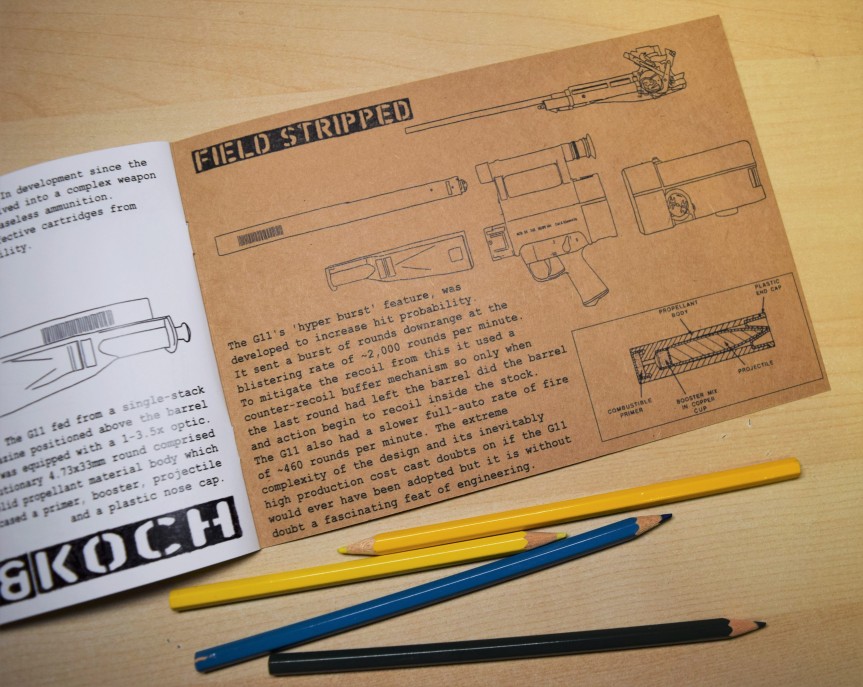 The book includes detailed original illustrations of each of the four ACR guns: the AAI, Colt, Steyr and of course the iconic HK G11. The 8-page booklets are 8×6″ (or A5 sized) and are available now from our website for $6.00, plus shipping.

You can find them in our new shop, here!

All the funds raised from the sale of the books will go toward supporting TAB through 2020.

But wait! That’s not all! We also have some extremely cool new stickers available. These 4″ cutout vinyl stickers feature the TAB logo on an illustration of the G11.

And last but not least we also have a small run of TAB logo badges available too!

You can find them all in our new shop, here!

This is the final of three introductory videos looking at the US Army’s ACR prototypes. We will be revisiting these rifles later to show disassembly and how they worked. You can check out our introduction to the H&K G11 here, our look at the AAI ACR here, the Steyr ACR here and  you can also find our in-depth ACR Program overview article here.

Colt’s entry was perhaps the most conventional of the designs submitted. Based on the rifle the program sought to replace. Colt’s ACR was essentially an improved M16, which fired both conventional 5.56x45mm ammunition as well as a new 5.56mm duplex round. While the duplex round increase hit probability at shorter ranges, it impacted long range accuracy requiring the additional use of conventional M855 rounds.

It incorporated a variety of improvements including a new oil/spring hydraulic buffer to mitigate recoil. This resulted in a major decrease in the weapon’s recoil, Colt suggested as much as a 40% mitigation. A reshaped pistol grip and a hand guard which mounted a sighting rib for snap shooting – this stemmed from recommendations from the Human Engineering Lab. The weapon had a flat-top upper receiver which incorporated a weaver rail so a 3.5x optic (an early ECLAN) or a more conventional sight/carrying handle could be fitted.

The rifle’s collapsible six position telescopic butt stock was an improved version of that offered with Colt’s carbines. When at full extension the Colt ACR was the longest rifle tested, at 40.6 inch or 103 cm long. A distinctive proprietary muzzle brake compensator (MBC) designed by Knight’s Armament was also added. The Knight’s MBC reduced the rifle’s report by 13.5-decibels and also played an important role in recoil mitigation.

During testing one of the duplex rounds was not properly seated inside the cartridge case and when fired became lodged in the barrel and during the course of fire and the weapon’s barrel blew when another round was fired. This was addressed by a slightly larger propellant charge.

Another negative to the Colt entry was that, in addition to having to carry two types of 5.56mm ammunition,  its duplex round offered no improvement in weight and was infact slightly heavier than standard M855 ammunition. While the hydraulic buffer, muzzle device and furniture were not used later, some of the features developed for the ACR entry were later employed in the M16A3 and later A4. These included the selector configuration and the flat-top upper receiver.

Please do not reproduce photographs taken by Matthew Moss without permission or credit. ©The Armourer’s Bench 2018