The displays outlined the history and legacy of the Vickers Gun, with displays looking at the logistics of using the Vickers in the field, how they were used with range finders, the mechanisation of the British Army, the barrage at High Wood during the First World War, the kit used with the guns and how the guns themselves worked. Also on display were Robbie McGuire’s documentaries about the members of the Machine Gun Corps who were awarded the Victoria Cross and Adam Blackmore-Heal’s documentary about the shoot at Bisley a couple of weeks earlier.

It was great to see and speak to so many people who wanted to learn more about the Vickers Gun and then men who used them during the guns’ near 60 year service life.

I had the pleasure of giving a talk about how the vickers was used in the indirect fire role and I’ll be sharing that as a separate video in the future. This video is just a quick walk around showing some of the exhibits and kit that were on display. I highly recommend heading over to the Vickers Machine Gun Collection & Research Association’s YouTube channel and checking out their videos from the event too.

A couple of weeks ago I had the honour of taking part in a shoot at Bisley to commemorate the disbandment of the British Army’s Machine Gun Corps. The Corps was formed in 1915 and disbanded in July 1922. They left an important legacy of skills and doctrine for machine gun use which remains with the British Army today.

Here’s some photos from the shoot (courtesy of Adam Blackmore-Heal):

Throughout the day I captured some behind the scenes footage and Rich Willis was kind enough to run my camera for me during the shoot when I had my hands full. This was the first time this many guns had been fired together in 20 years and all in all around 16,000 rounds were fired and over 700 people turned out to watch the event.

Not only did the day illustrate the impressive volume of fire that the guns were capable of but it also put their lethality into perspective. The shoot illustrated the devastation the weapons could bring and the important legacy of the men who manned them.

I highly recommend visiting the Vickers Machine Gun Collection & Research Association’s YouTube channel to watch the stream of the full 45 minute shoot, a brilliant 360-degree view video which puts you right on the firing point and a really special 20 minute mini documentary about the shoot.

In this final video of the Rhineland Campaign Weapons series we take a look at the little known role of the British and Commonwealth forces’ Vickers Guns. With the help of the Vickers MG Collection & Research Association we recreated a platoon line consisting of 4 Vickers Guns to recreate the Pepperpot tactics used during Operation Veritable – the western Allies’ invasion of Germany.

In this video we examine how Vickers Medium Machine Guns were used en masse to soften up enemy positions before Operation Veritable began and during the subsequent advance into the Rhineland. The Vickers was used alongside artillery, mortars and even anti-aircraft guns in what was known as a ‘pepperpot’ fire plan – where the focus was on weight of fire. The Vickers supported the advance through out the campaign and in this video we aimed to capture some of the feel of what those pepperpot bombardments might have been like – albeit on much, much smaller scale.

Using contemporary photographs and footage we recreated the gun pits, complete with overhead cover, pits dug to the original manuals and plenty of empty belts and belt boxes. Right down to the gun crews being badged up as Middlesex Regiment. Check out the comparison of our shoot and a contemporary photograph taken during the battle for Goch, 20 February 1945.

Below are some behind the scenes photos from the shoot taken by myself and Robbie McGuire:

A huge thank you to everyone who made the shoot possible, I’m very proud of what we were able to achieve with this shoot.

If you enjoyed this video and article please consider supporting our work here. We have some great perks available for Patreon Supporters. Thank you for your support!

Join us for as we examine the Carol Reed-directed 1944 British classic ‘The Way Ahead’ starring David Niven, Stanley Holloway, William Hartnell, Peter Ustinov and John Laurie. We’re joined by special guest Richard Fisher, of the Vickers MG Collection and Research Association, who picked the film partly due to it’s iconic scene featuring a Vickers Gun! The film follows a platoon of men through their call up, training and up to their first experience of battle!

The episode is also available on all other podcast platforms, you can find them here.

Here’s some stills from the film:

The Vickers Gun is an iconic weapon, developed from the Maxim and adopted by the British in 1912. It served for over 50 years in conflicts all around the world. In this video, we’re lucky enough to have Richard Fisher of the Vickers Machine Gun Collection and Research Association shows us how to disassemble a the gun and talk us through its internals.

Big thank you to Rich for taking the time to help with this video and provide the voice over explaining the process! We’ll have more videos on the Vickers Gun in the future! Check out Richard’s work over on the Vickers Machine Gun Collection and Research Association’s site here.

I’ll let Rich explain the disassembly process in real time in the video but here are a couple of photographs of the gun disassembled:

This is the gun in its fully field stripped condition, with lock still assembled, but with its fusee spring and cover off and its barrel and action removed. Just below the barrel is the feed block.

Here’s the Vickers Gun’s lock disassembled into its 14 component parts:

This photo gives us a good look inside the receiver with the barrel, action and side plates removed, The spade grip assembly simply folds down to allow the action and barrel to be slide out of the gun.

Finally, here’s the gun reassembled and ready for action.

Thanks again to Richard for his help with this video, it was great to collaborate and hopefully we’ll have more videos with Rich in the future.  Please check out the Vickers Machine Gun Collection & Research Association’s site to find out more about what they do. They have some wonderful resources, including a comprehensive collection of manuals, for not just the Vickers but also the wider British Army from the past 100 years. You can also order copies of the brilliant instructional posters which were featured in the video over on the the associations website too!

If you enjoyed the video and this article please consider supporting our work here. We have some great new perks available for Patreon Supporters.

Richard Fisher, the director of the Vickers Machine Gun Collection and Research Association, was kind enough to invite us down to take a look at his collection of Vickers guns. Richard is a fantastic source of information on the Vickers, and British small arms more generally, and I’ve picked his brains on numerous occasions in the past so it was a real pleasure to meet him in person and discuss the collection.

I thought the best way to explain what the collection and research association does is to discuss it on camera with Richard, so as a result we have TAB’s first ever interview. Incidentally, it’s also the first on-camera interview I’ve ever conducted!

Richard’s impressive collection spans much of the Vickers’ history with representative examples of not just the many different types of Vickers that were produced but also the accoutrements and equipment that went along with the guns. The collection endeavours to bring together all the weapons, kit and equipment that a British Army section that operated the Vickers would have carried – during both World Wars. 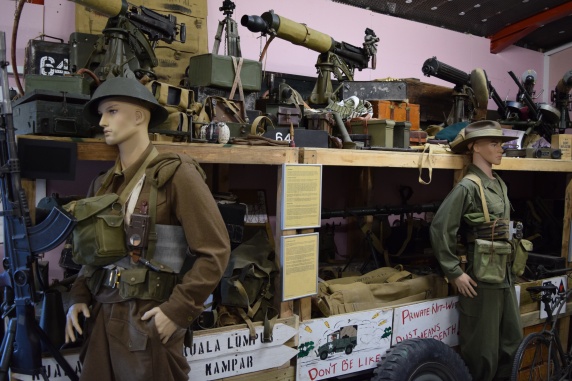 The collection is open to visits from interested individuals and parties and is often shown at history events around the UK. Richard’s website is one of the best sources of information, manuals and documents on the Vickers available and is well worth checking out.

We’d like to thank Richard for inviting us down and for speaking to us about the collection. In the future we will hopefully have more videos featuring the collection.