Development of the gun actually began before the war in 1938, but the QF 6pdr MkII Anti-Tank gun didn’t enter full production until 1942. After the evacuation from Dunkirk in the summer of 1940, and the loss of nearly 600 AT guns, it was decided to focus on the 2pdr which was then already in production. The 6pdr saw action for the first time in the Western Desert against the Afrika Korps, serving alongside its predecessor the 2pdr.

The 6pdr was a 57mm gun, firing a 57x441mmR shell effective out to 1,700 yards or 1,500m – with a rated maximum range of 5,000 yd. Unlike its predecessor the 6pdr could fire both armour piercing and high explosive rounds. The gun weighed in at 2,520 lb or just under 1,150 kg. Manned by a six man crew the gun had a vertically sliding breechblock and could fire up to 15 rounds per minute.

The 6pdr had a Hydro-pneumatic recuperator which mitigated some of the gun’s recoil. The barrel recoiled around 30 inches along its cradle immediately after firing. It was mounted on a variety of carriages with the most common being a split trail carriage with 45-degrees of traverse left and right. The 6pdr could be fired with its split trail deployed or closed. The gun could be elevated 15-degrees and depressed 5-degrees – less than its predecessor, although elevation was not a key requirement for a direct fire weapon like an anti-tank gun.

Five Marks of 6pdr were produced, the MkI development model was declared obsolete and didn’t enter production. Production of the MkII began in late 1941, it had a shorter barrel and was later replaced by the longer barrelled MkIV, which also had a single-baffle muzzle brake, one of the first British guns to have one. The MkIII and V variants had special lugs to enable them to be mounted in tanks. The first guns produced were MkIIIs, while these could be carriage mounted they were earmarked for tanks.

The MkIII Airborne carriage was designed to be lighter so it could be transported aboard gliders and aircraft. Its trail legs were jointed in order to save room and the carriage was narrower which restricted the traverse to 37-degrees left or right. The shield was also redesigned with an even smaller profile. Identifiable by its straight, rather than wavy, top edge.

The gun was aimed using a No.22C 2 or 3-power sighting telescope, located on the left side of the gun, which projected through a sight box in the shield. The gunner also had an elevation wheel to his right and, unlike the 2pdr, the 6pdr used a free traverse rather than a geared wheel system. This was controlled by the gunner pushing or pulling the gun. The gun was fired by a firing lever on the left side of the breech. On the right side of the gun, an ammunition box with space for three rounds could be attached to the shield for emergency use. The gun shield consisted of two/four sections, made of bulletproof steel plate, which had a lower profile than the earlier 2pdr.

Unlike the 2pdr, the 6pdr had an array of ammunition that continued to evolve during the war. The initial armour piercing round could penetrate 70mm or 2.8in of armour at 1,600 yards / 1,500m while the Armour-Piercing Capped Ballistic Cap (APCBC) introduced in early 1943 increased this to 3.1in, while the Armour-Piercing, Discarding Sabot (APDS) shot introduced in Spring 1944, enabled it to effectively engage Tiger I and Panther frontal armour, penetrating 4.8 inches of armour at 1,500m. It is worth noting that figures on penetration vary somewhat from source to source. A high explosive shell that allowed the guns to engage non-armoured targets more effectively was introduced in 1943.

Initially used solely by the Royal Artillery’s anti-tank regiments comprising of four batteries, each with 12 guns. By 1944 an infantry division would be equipped with as many as 78 6pdrs and more than 30 heavier 17pdrs while an armoured divisions was equipped with 30 6pdrs.

The 6pdrs first saw action in North Africa proving to be highly effective against both Italian and German armour. During the Second Battle of El Alamein, 19 6pdrs were instrumental in the defence of Outpost Snipe. The 2nd Rifle Brigade and their supporting 6pdrs managed to knock out more than 55 Axis armoured vehicles including Panzer IIIs, Semovente 75/18 self-propelled guns and a number of Panzer IVs. The gunners used enfilading fire to target weaker side armour and interlocked fields of fire caught advancing tanks in killing grounds.

During Operation Market Garden, the airborne 6pdrs of the Airlanding Anti-Tank Batteries proved critical in beating back German armoured counter attacks around Oosterbeek and at the bridge in Arnhem itself. They were instrumental in repulsing the SS reconnaissance battalion which attempted to cross the bridge on the second day of the battle.

One desperate action involving a section of two 6pdrs saw three StuG-III self-propelled guns knocked out before the crews of both guns were killed. The last survivor, Lance-Sergeant Baskeyfield managed to man on of the guns alone and destroy a fourth StuG-III before he was killed. For his actions he was awarded the Victoria Cross.

Like its predecessor the 6pdr was also used as a vehicle gun, mounted in the Churchill Mks III & IV, Valentine Mk IX and the Crusader Mk III tanks as well as the Canadian MkII Ram and the MkII AEC Armoured Car. These vehicles had previously been designed to mount the 2pdr, but were adapted to fit the new 6pdr, in some cases having to remove a crew member from the turret to make enough room to fit the new gun. The Cavalier, Cromwell and Centaur tanks were designed to mount the new larger gun from scratch.

The first tank, equipped with a 6pdr, to go into action was the Mk III Churchill, which took part in the disastrous Dieppe Raid in August 1942. The new tanks, assigned to the 14th Army Tank Regiment (The Calgary Regiment (Tank)), were all abandoned or destroyed during the raid.

In North Africa, like the 2pdr, the heavier guns were mounted on trucks as Portees. Additionally AEC produced the Mk1 Gun Carrier or Deacon self-propelled gun – a 6pdr mounted in an armoured turret on the back of an AEC Matador truck chassis. These performed well in the desert but more enclosed country made them vulnerable and they were removed from service after the North African campaign.

It was not only tanks the 6pdr found itself mounted in. Coupled with the Molins automatic loading system it was also mounted in the RAF’s De Havilland Mosquito Mark XVIII ‘Tstetse’ and the Royal Navy’s motor torpedo boats. The Navy’s Molins auto-loader allowed the gun to fire a 6-round burst at a rate of 1 round per second. Nearly 600 naval versions of the gun, the QF 6pdr MkIIA, were produced. The RAF’s use was more short-lived with only 17 6pdr Tstetses built before 3in rockets were standardised. Despite this two Tsetse of 248 Squadron sank the German submarine U-976 in March 1944.

The US also adopted the 6pdr to replace their 37mm M3 anti-tank gun. It had initially been planned to produce the 6pdr in the US under the lend-lease agreement (4,242 guns were eventually delivered for British use) but in May 1941 the US approved the production of the 6pdr as the 57mm M1 Gun. The US M1 guns had a longer barrel than their British counterparts and many smaller differences in manufacture. The US, like Britain, mounted the gun on vehicles such as the M3 half-track – the T48 Gun Motor Carriage. By the end of the war the US has produced over 15,600 M1 anti-tank guns.

Ordnance QF 75mm was developed from the 6pdr, the 75mm guns were manufacture by boring out the 6pdr’s barrel to enable it to fire the US 75mm M46 HE round. The QF 75mm was fitted to a number of British armoured vehicles from 1943 onwards.

The 6pdr was a simpler gun to manufacture than its predecessor but despite being effective throughout the war it too was surpassed by a heavier gun, the QF 17pdr AT gun, which was developed in the early 1940s, the 17pdr was accepted for service in May 1942 but the 6pdr remained in service alongside the heavier guns.

After the end of the war the 6pdr continued to see use with a number of countries including Israel during the 1950s, the Irish Army and South Korea during the Korean War. The 6pdr remained in British service until 1951, before being replaced entirely by the 17pdr.

If you enjoyed the video and this article please consider supporting our work here. We have some great new perks available for Patreon Supporters. 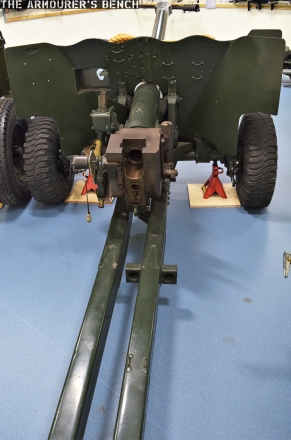 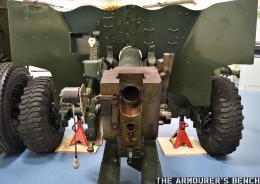 Our special tanks to the collection the gun belongs to for their permission to film the gun.