In the first part of Vic’s special episode on the AR-10 we brought you a remastered version of the fascinating 1958 ArmaLite/Fairchild promotional sales film made for ArmaLite salesmen, like Sam Cummings and Jacques Michault, to show to prospective buyers of the new rifle. Back in the 1990s Vic was lucky enough to scan Michault’s copy the film and has recently remastered with better image quality.

Below you can find the video, time stamped to begin at the promotional film (although I highly recommend you watch the entire video for Vic’s introduction to the early history of the AR-10).

Lets break the video down, with the help of some screen captures. The film opens with a rifleman emerging from the sea, firing as he advances. The film then explains Fairchild’s background and beings to explain the features of the rifle.

The film then shows several shots of the rifle’s lower receiver being milled.

None other than the rifle’s designer himself, Eugene Stoner, then takes an AR-10 from a wall display and proceeds to completely disassemble it.

Stoner completely strips the rifle, its muzzle device and its magazine before Charles Dorchester, ArmaLite’s production manager, demonstrating the rifle’s operation and subjects it to sub-zero temperatures and once again firing the rifle. 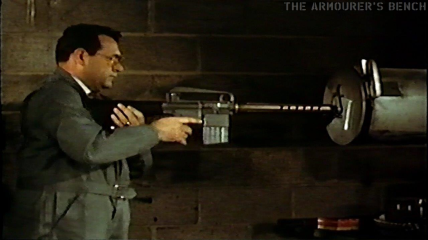 The film then shows the rifle being used in a variety of roles:

Stoner then covers the rifle with sand before running five magazines through the rifle in quick succession to demonstrate reliability:

The rifle is then submerged in mud (with its dust cover closed) and demonstrated again.

The film then shows how simple field stripping and cleaning is before Stoner demonstrates the belt-fed variant of the rifle:

Don’t forget to check out the full episode and the accompanying blog here!