The 1960s and 70s saw Chile was racked by political turmoil with a military junta, led by General Augusto Pinochet, taking control in September 1973. Pinochet’s Junta took control of the country via a bloody coup, overthrowing President Salvador Allende, and as a result all export of small arms from Britain to Chile ceased. In the early 1970s, before the coup d’etat, The records of the Sterling Armaments Company show Chile purchased an example of the company’s Mk4 submachine guns and no less than 101 suppressed Mk5 Sterling-Patchetts.

With the import of small arms from the UK and other countries banned by an embargo Chile’s government were eager to increase their self-sufficiency.  As a result in the mid-1970s the state-owned firearms manufacturer Fábricas y Maestranzas del Ejército (FAMAE) experimented with copying the Sterling Mk4 in an effort to minimise development costs.

The resulting 9x19mm submachine gun was dubbed the PAF or ‘Pistola Ametralladora FAMAE’. It took the basic Sterling design and simplified it. The PAF lacks the Mk4’s perforated barrel jacket and instead has an exposed barrel, tipped with a rudimentary spoon-shaped compensator. It also lacked the Sterling’s folding stock, instead it had a simple collapsing stock. As a result, the disassembly catch has been moved 90-degrees to the left side of the receiver.

Like the original, the Chilean copy retained the dirt-clearing grooves cut into the weapon’s breech block. The PAF’s plastic charging handle and butt stock shape are reminiscent of the Heckler & Koch MP5 – although much cheaper feeling in quality. The profile of the PAF’s pistol grip is slightly different but the weapon still fed from standard 34-round Sterling magazines. Interestingly, unlike the Sterling’s screwed-in-place barrel, the PAF’s was held in place by a machined barrel nut – in terms of production this is a much simpler system, no doubt borrowed from the Uzi.

left-side view of the PAF with stock collapsed (Matthew Moss) 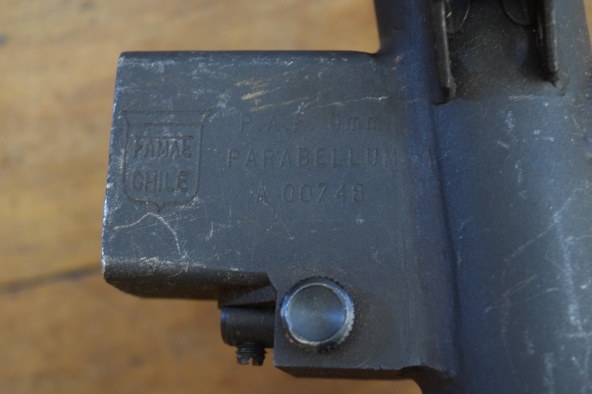 The Chilean copy weighs significantly less than the British original, 2.5kg (5.5 lbs) and reportedly has a much higher 800 rounds-per-minute rate of fire. In general the PAF looks much like Sterling’s own later Para Pistol model, the Mk7.

Some sources suggest that only a small number of toolroom prototypes were made, although the relatively high serial number, #00748, of the example we looked at may indicate a limited production run may have been produced. It is clear, however, that the PAF did not go into general production. Instead, FAMAE later focused on weapons derived from Swiss small arms including the SIG SG 510 and SIG SG 540, and the SAF submachine gun introduced in the 1990s.

Note: The PAF was the last weapon we filmed during this particular research trip and we did not have time to film or photograph the PAF’s internals (we filmed a lot of videos that day and were pressed for time). Rest assured if and when we get the opportunity we will update this article with photographs of the weapon disassembled!

Please do not reproduce photographs taken by Matthew Moss without permission or credit. ©The Armourer’s Bench 2018.